The best hotel in Lahore is undoubtedly the Pearl Continental. It’s a fancy 5-star hotel with excellent security.

The Lahore fort is a UNESCO World Heritage Site. It is one of the most important historic buildings in Lahore.

A little history on the Lahore Fort…Its origin dates back to the 11th Century! At that time, it was a simple brick and mud structure. In the late 16th Century, Emperor Akbar set out to modernize it and add design elements from both Islamic and Hindu styles. This was the origin of the modern Lahore Fort. 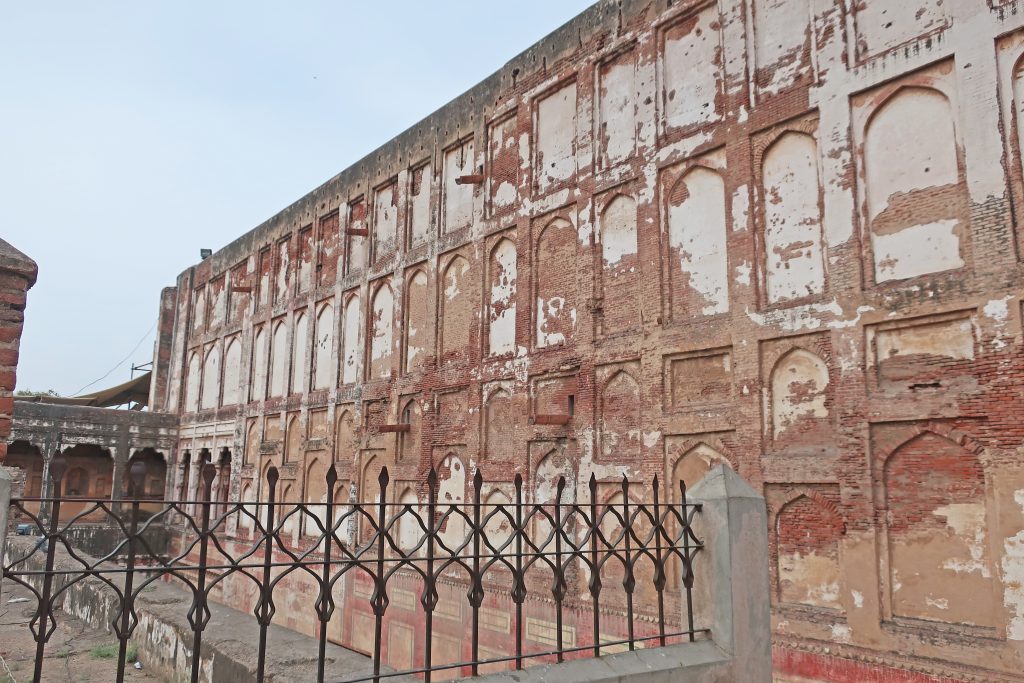 Lahore was ruled by many empires during the course of history. Most notably, however, the Mughal Empire controlled Lahore from the 16th to 18th Centuries. During the 17th Century, the Mughal Empire famously rebuilt the Lahore Fort. The structure of the fort that we see today is that which the Mughal’s designed.

After the fall of the Mughals, the Sikh Empire used the fort to house their ruling elite. Because of this rich history, the fort has become one of the most famous buildings of Lahore. 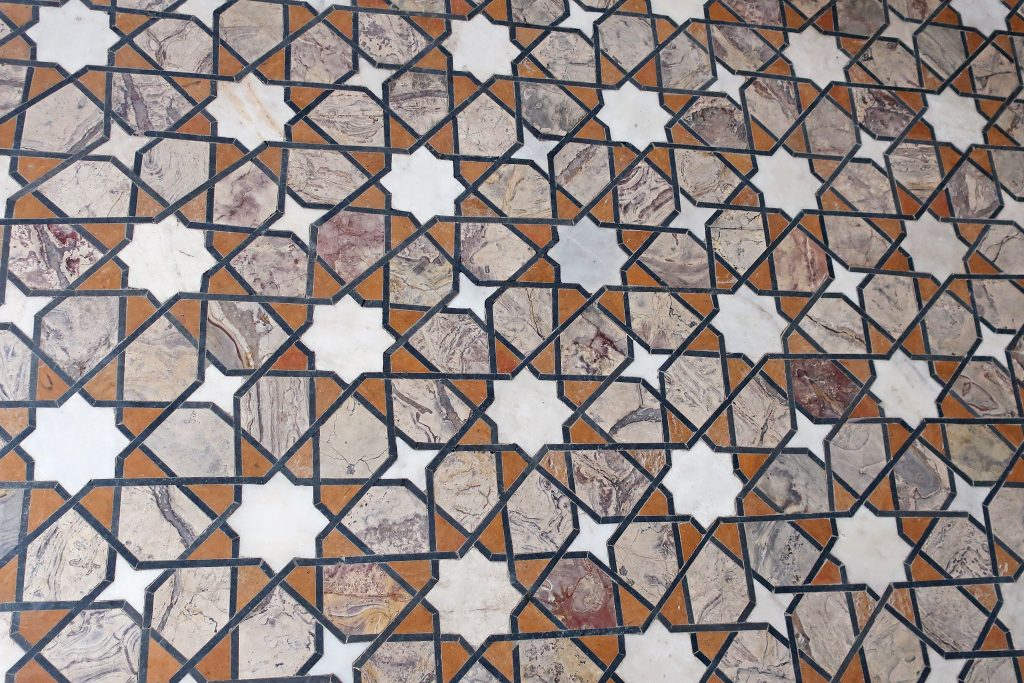 The fort is very large. There’s a few sections you shouldn’t miss. Particularly, you should visit the Sheesh Mahal, the Picture Wall, the Alamgiri Gate and the quadrangle. 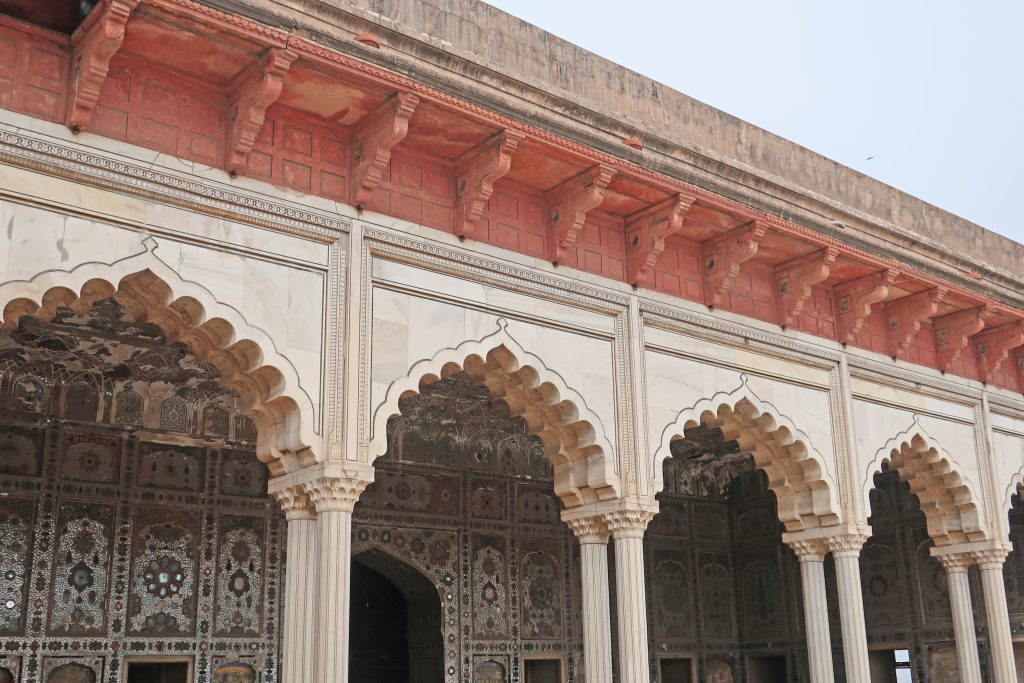 You’ll find that the Sheesh Mahal, meaning Palace of Mirrors, is elaborately decorated in white marble with inlaid reflective stones. This is one of the best places to visit in Lahore! The details, colors and designs of this place are absolutely stunning. 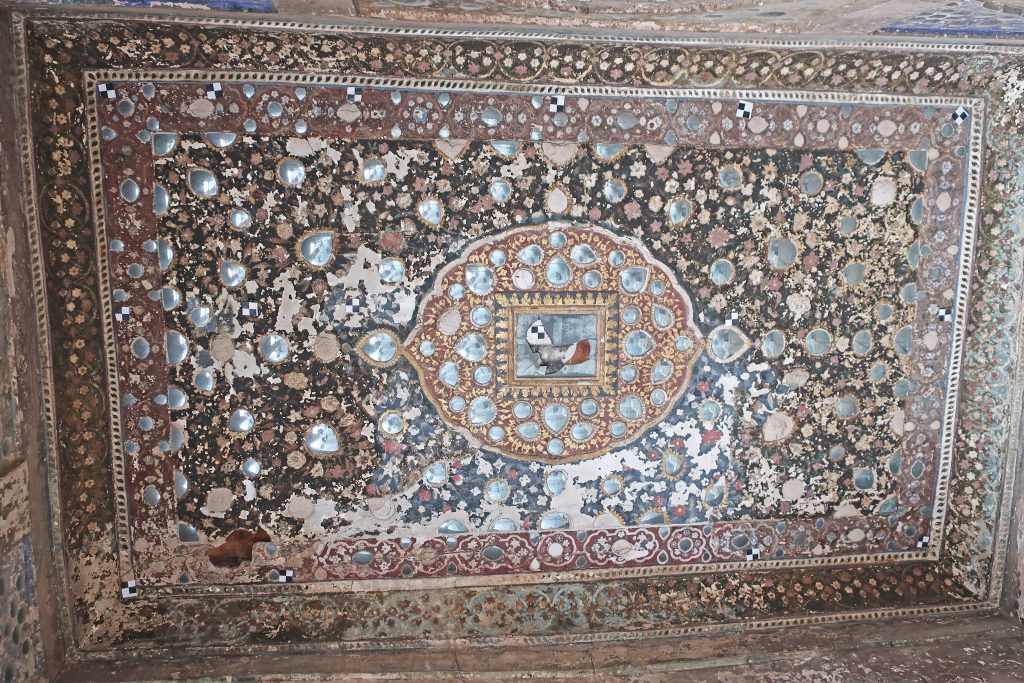 Emperor Jahangir created the Picture Wall in the Lahore’s fort was during the early 17th Century. Jahangir used European style features and icons of Christianity in his developments. The Picture Wall is decorated lavishly with mosaics, frescoes and glazed tiles. The figures depicted include angels, winged dragons, elephant fights and polo games. Unfortunately, the picture wall was being restored during our visit. 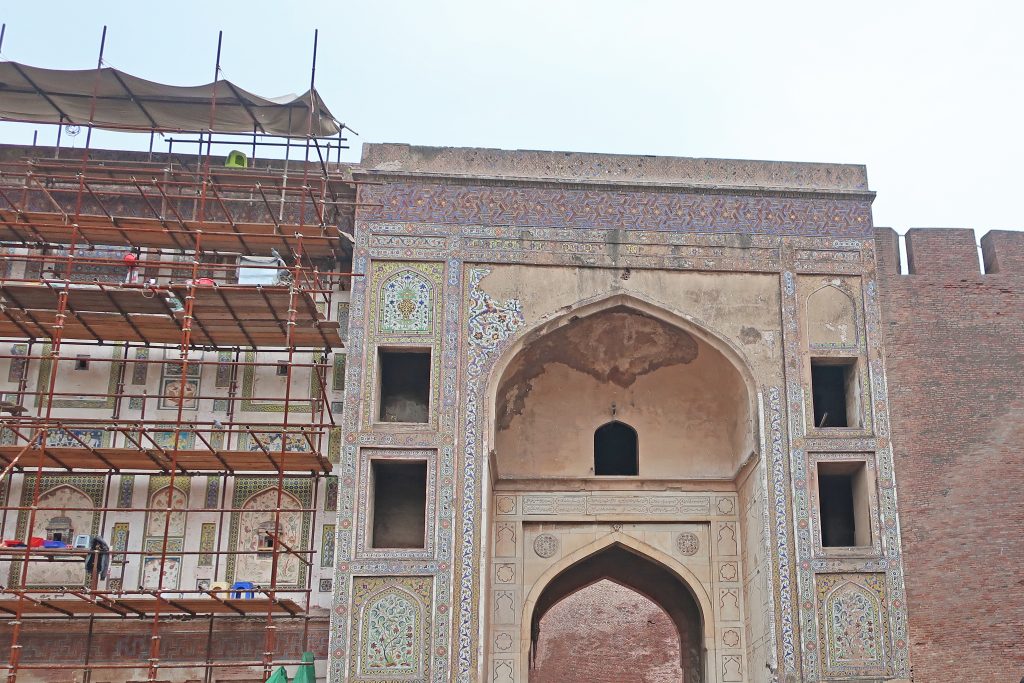 Jahangir’s Quadrangle is contained within the northeastern corner of the Lahore Fort. It includes features such as the Sehdari Pavillion and the Diwan-i-Aam. 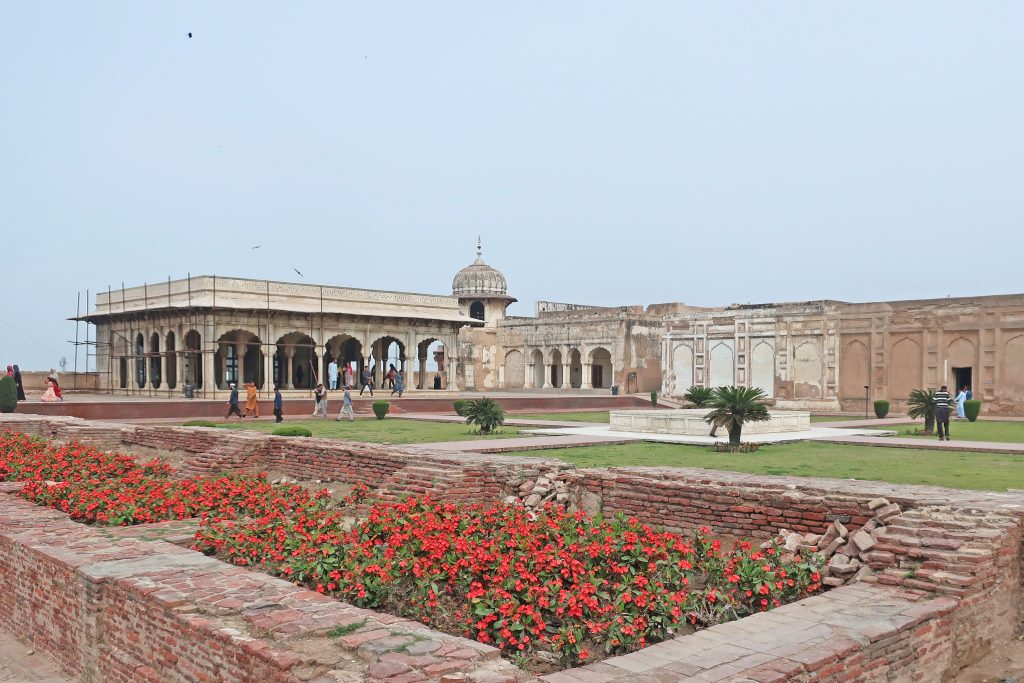 The Alamgiri gate is located on the western end of the Lahore Fort. This gate is another feature that was added by the Mughals. This image of this gate became an important symbol for the city of Lahore. It was at one time displayed on Pakistani currency! 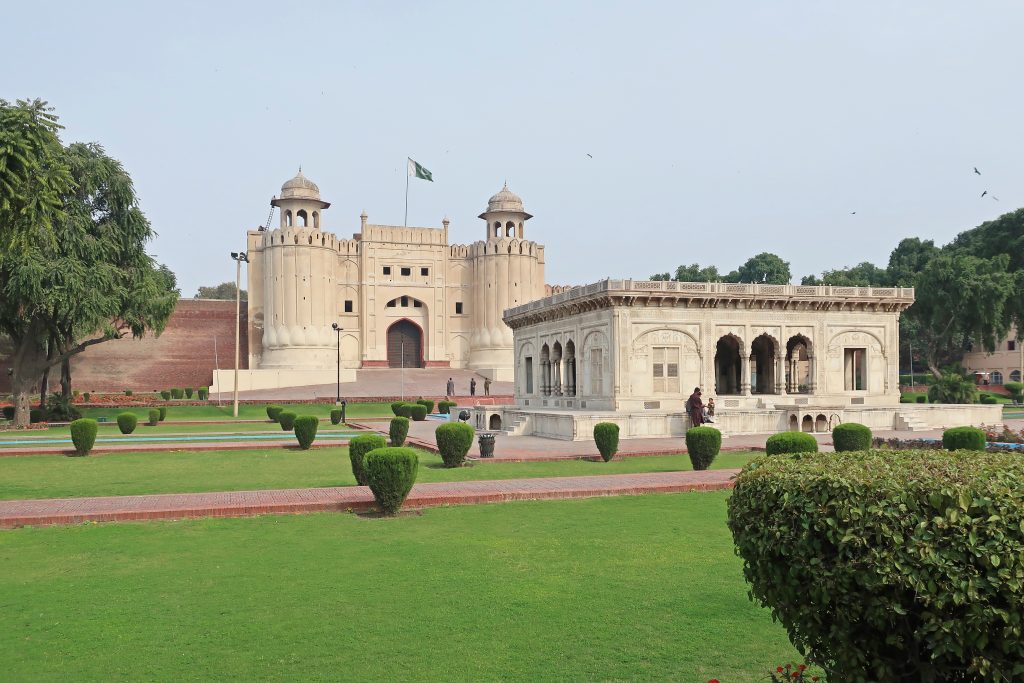 You can also get great views of the Badshahi Mosque from inside the Lahore Fort. 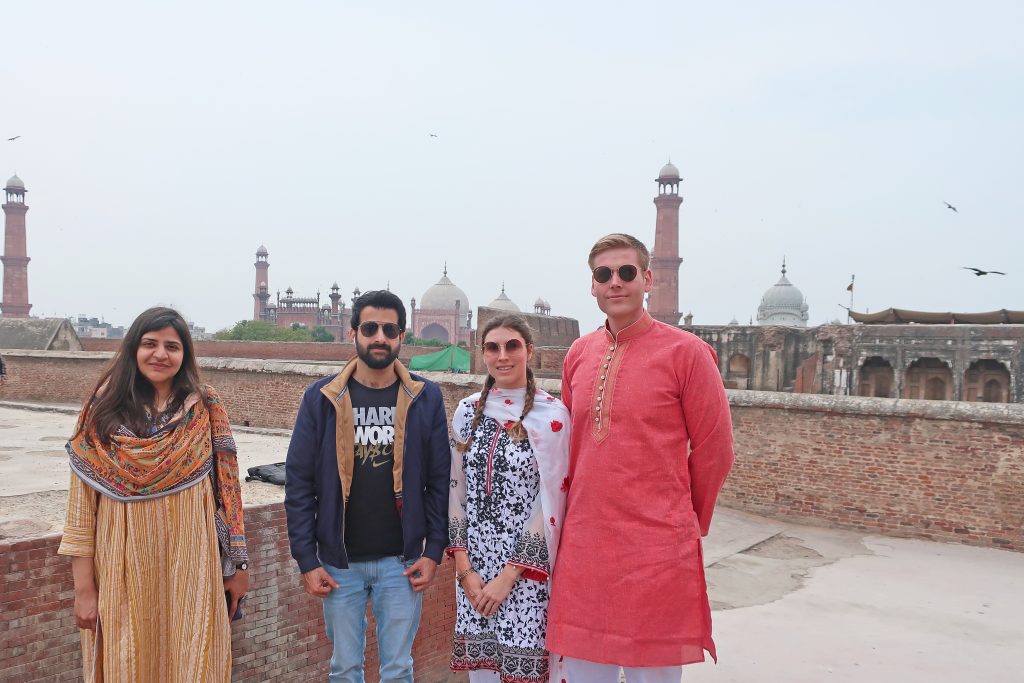 The Badshahi Mosque is one of the top places to visit in Lahore. Another Mughal era masterpiece, this mosque is located just a few minutes walk from the Lahore Fort. 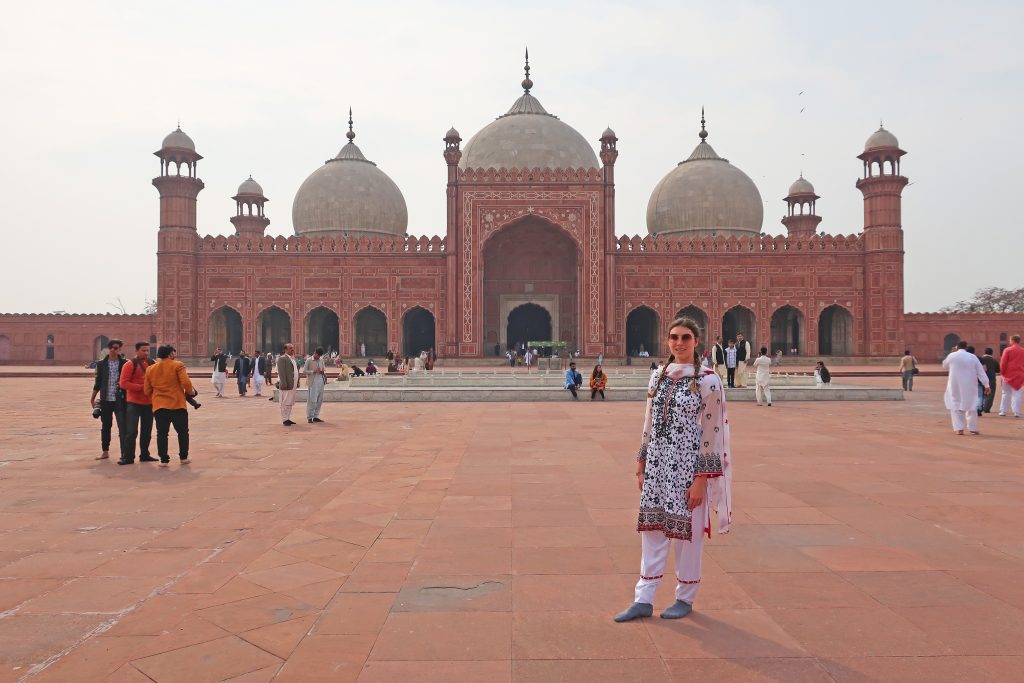 A little history on the Badshahi Mosque…Emperor Aurangzeb commissioned for this mosque to be built in the late 17th Century. The Mosque was built right next to the Lahore Fort to signify its importance. It became the largest imperial mosque of the Mughal era, and it may be one of the best examples of Mughal architecture. Also, it’s also one of the largest mosques in all of Pakistan (second only to the Faisal Mosque in Islamabad). 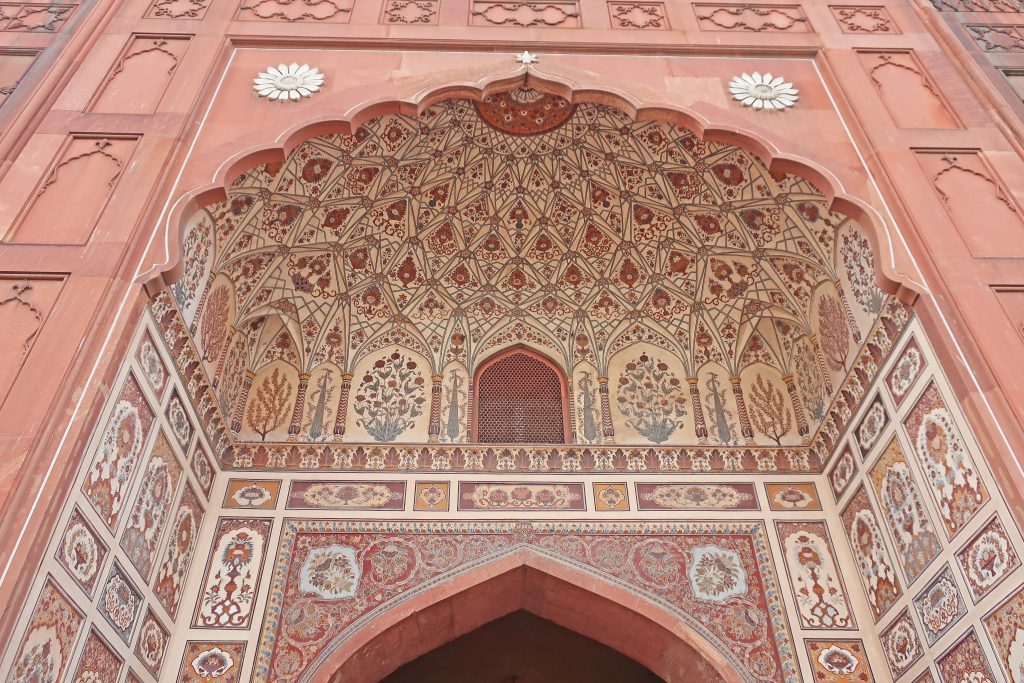 The Badshahi Mosque remains one of the most important places to see in Lahore. It is also one of the top Lahore tourist attractions because the mosque allows non-Muslims to enter. Many mosques around the world are usually off limits to non-Muslims. Be respectful. You must take your shoes off before entering. 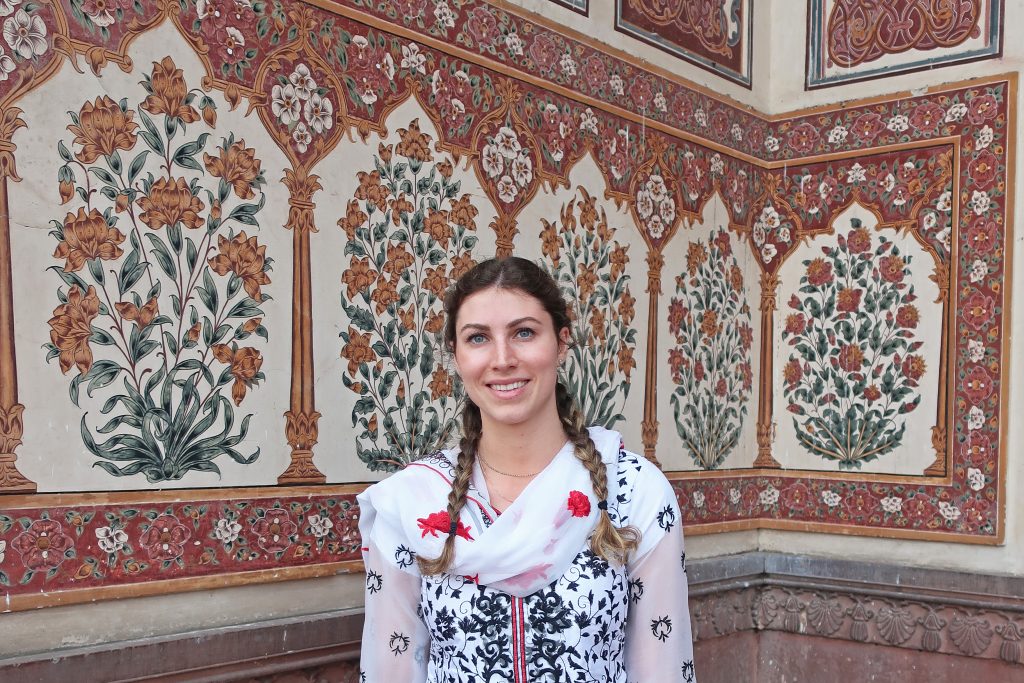 The architecture of the mosque has many Persian stylistic features. Below you can see the red sandstone facade is inlaid with marble accents. This is the entryway into the prayer room.

These are photos of the main prayer hall. 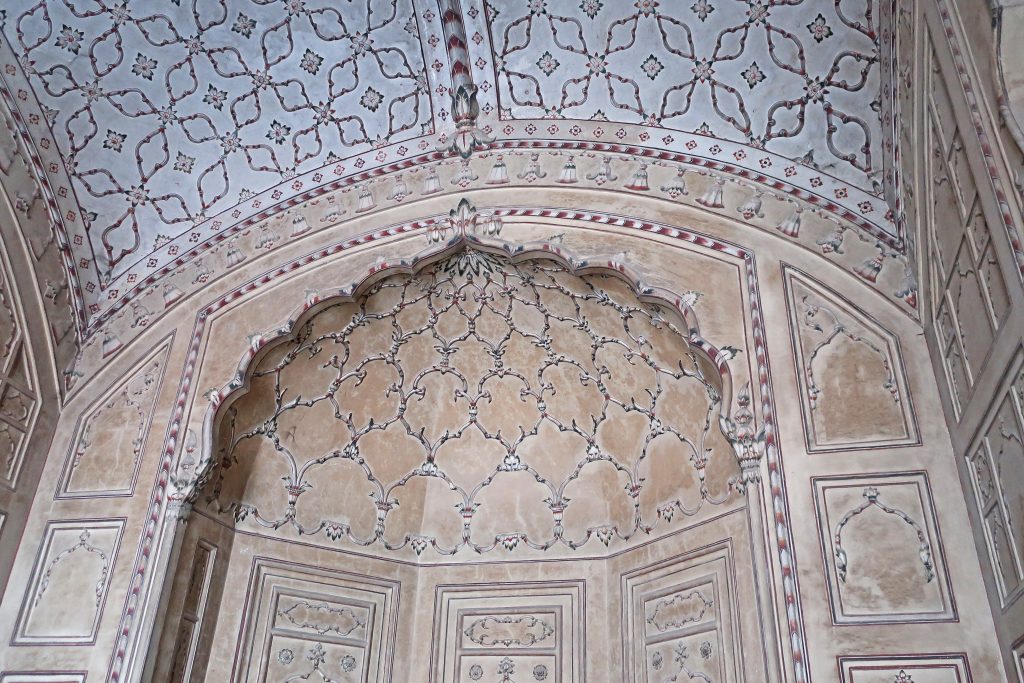 When the Sikh empire took over the city of Lahore in the early 19th Century, they decided to build their shrine next to the Badshahi Mosque. The core religion and belief system of the Sikh empire was Sikhism. Sikhism is a monotheistic religion based on the teachings of Guru Nanak (the first Guru).

The religion emphases meditation, equality of all humankind, selflessness and faith in the sole creator. After the first Guru, there were nine human gurus and one book Guru. The Tenth Guru, Guru Granth Sahib is a book of scriptures. 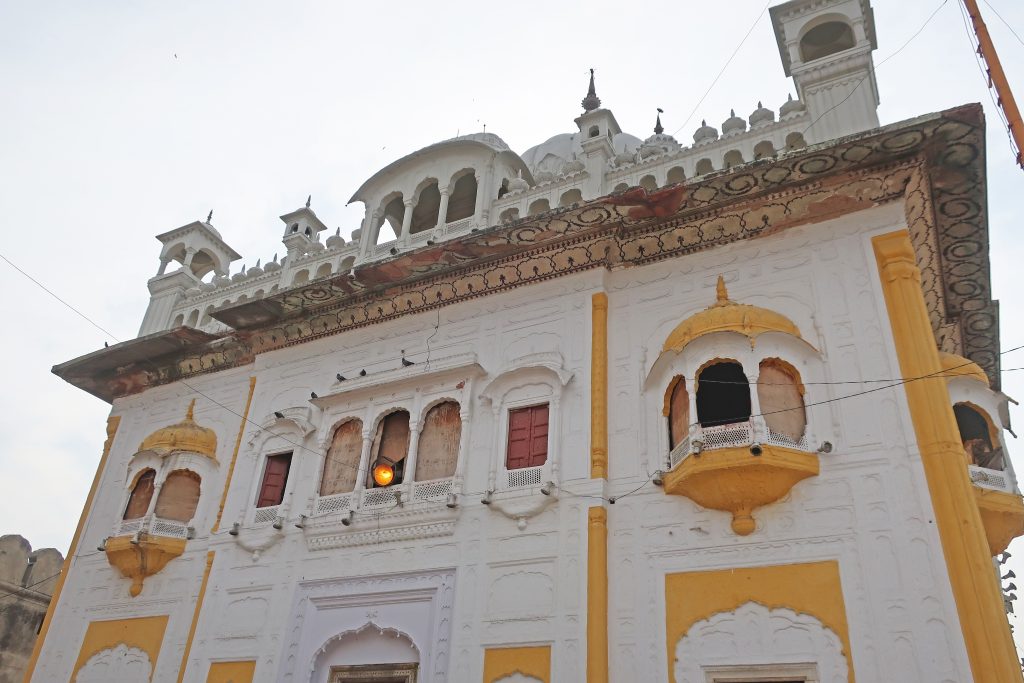 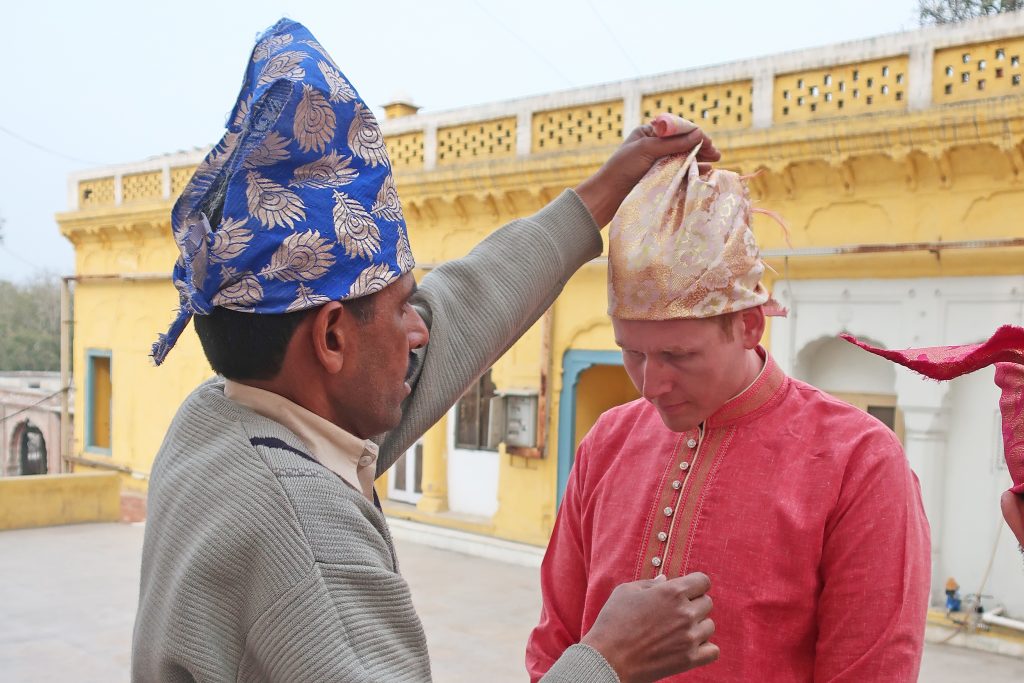 Men must also cover their heads to enter the Sikh Temple. It is one of the most interesting places in Lahore. However, the Sikh Temple is not one of the popular Lahore attractions because it is usually closed to the public. We were given special permission to enter.

If motivated, I do believe that others may also be allowed to visit this beautiful place. Talk to locals, or try to find a guide. We spontaneously arranged for a guide when we got to the Lahore Fort. Our guide took us through the Lahore Fort, the Badshahi Mosque and the Sikh Shrine.

The Haveli Baroodh Khan should not be missed when traveling to Lahore. It is a townhouse that was built in the 18th Century during Sikh rule of Pakistan. During that time, it was used as for ammunition storage and as the personal residence for commanding officers. 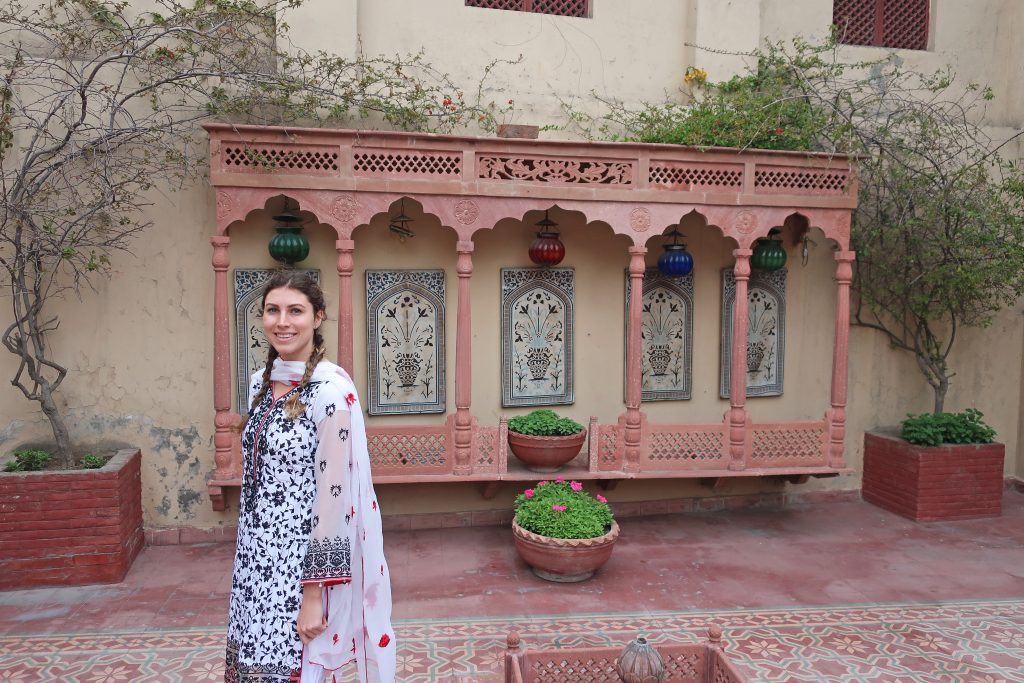 Currently, the Haveli Baroodh Khan belogs to the family of Yousuf Salahuddin. Salahuddin inherited the residence from his grandfather Muhammad Iqbal. 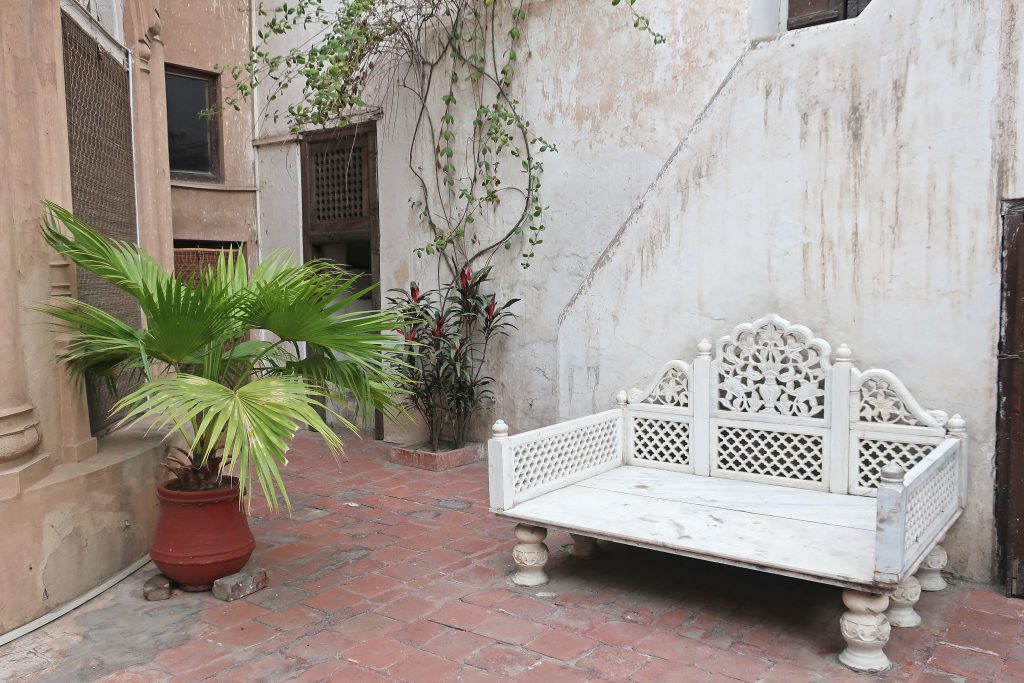 Muhammad Iqbal was a very famous literary scholar, poet, philosopher and politician. Historians credit Muhammad Iqbal with inspiring the Pakistan Movement for independence. He was highly regarded and referred to as, “the Muslim philosophical thinker of modern times.” 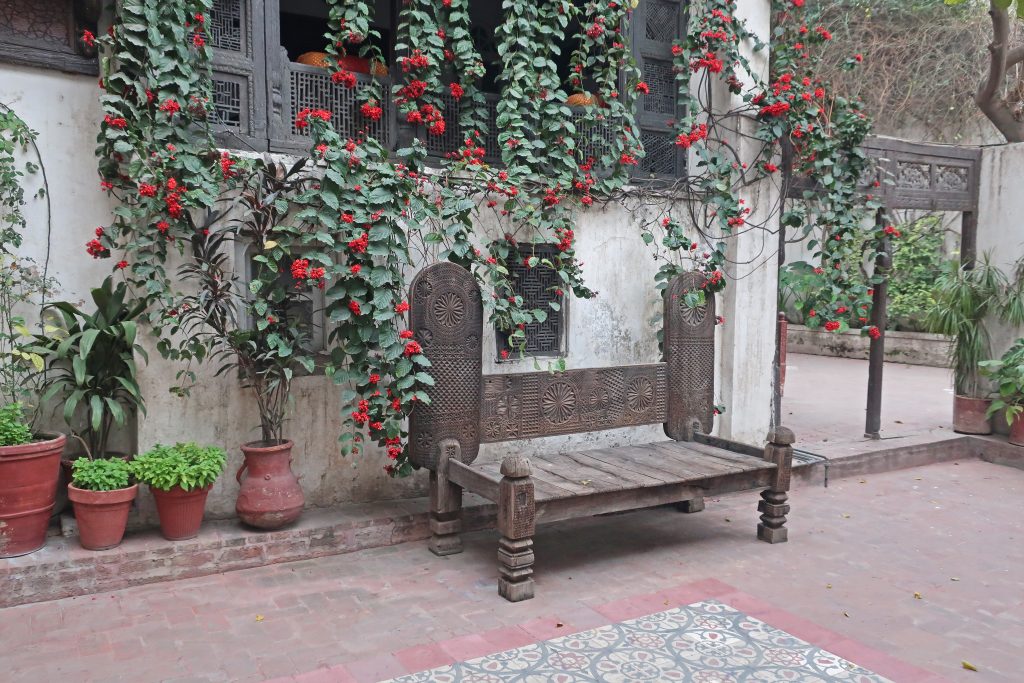 The Haveli Baroodh Khan is used for important cultural activities in Lahore. It is an unconventional tourist attraction, but certainly one of the top things to see in Lahore. 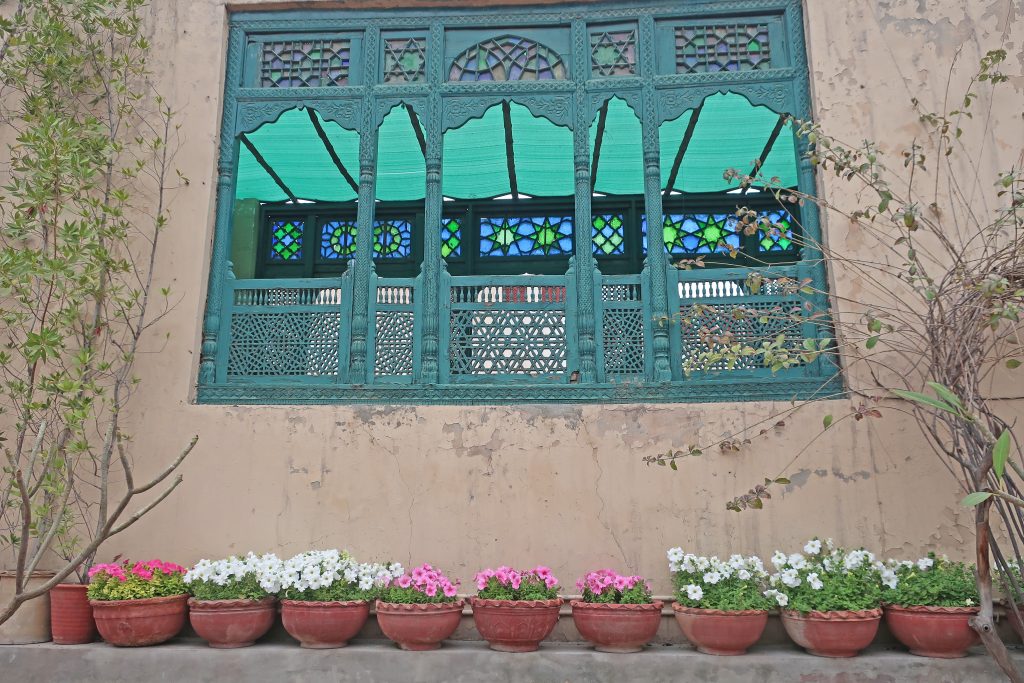 The Naqsh School of Fine Arts is located in Lahore’s historic Walled City neighborhood. The purpose of this art school is the preserve traditional Pakistani artistic skills such as ceramics, calligraphy, painting and drawing.

At the art Gallery, there is also a store where you can purchase art created by Naqsh students. It’s, without a doubt, one of the most beautiful places to see in Lahore. Also, you can get unique, handmade, authentic Pakistani gifts to bring home. 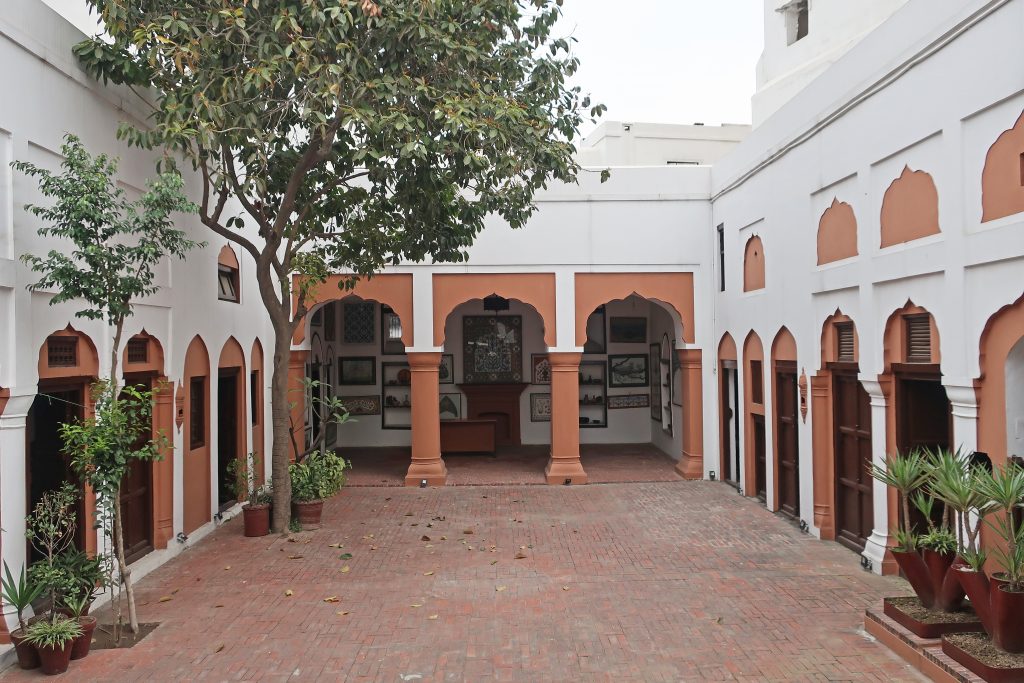 Another one of the beautiful historic places in Lahore is the Wazir Khan Mosque. This is another 17th Century Mughal era mosque. It is one of the popular Lahore tourist attractions because it is thought to be the most extravagantly decorated Mughal mosque. The elaborate details include frescoes, intricate tile work and elaborate floral motifs. Faience is the technique used through this mosque. It involves pottery like surfaces tin-glazed to create a bright and shinny appearance. The outside of the mosque more closely aligns with the Persian style, but the interior is distinctly Punjabi. 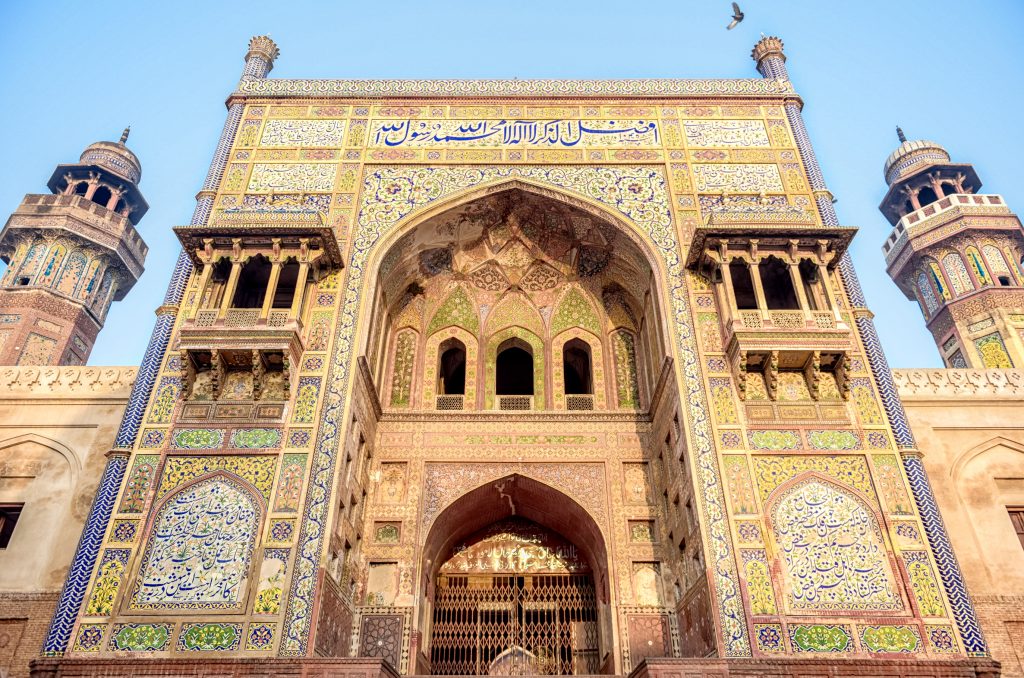 Locate near the Lahore Fort, in between Fort Road and the Roshnai Gate is Lahore’s Food Street. Eating on Food Street is one of the top things to do in Lahore. The street comes alive at night. This is a great place to find restaurants in Lahore. 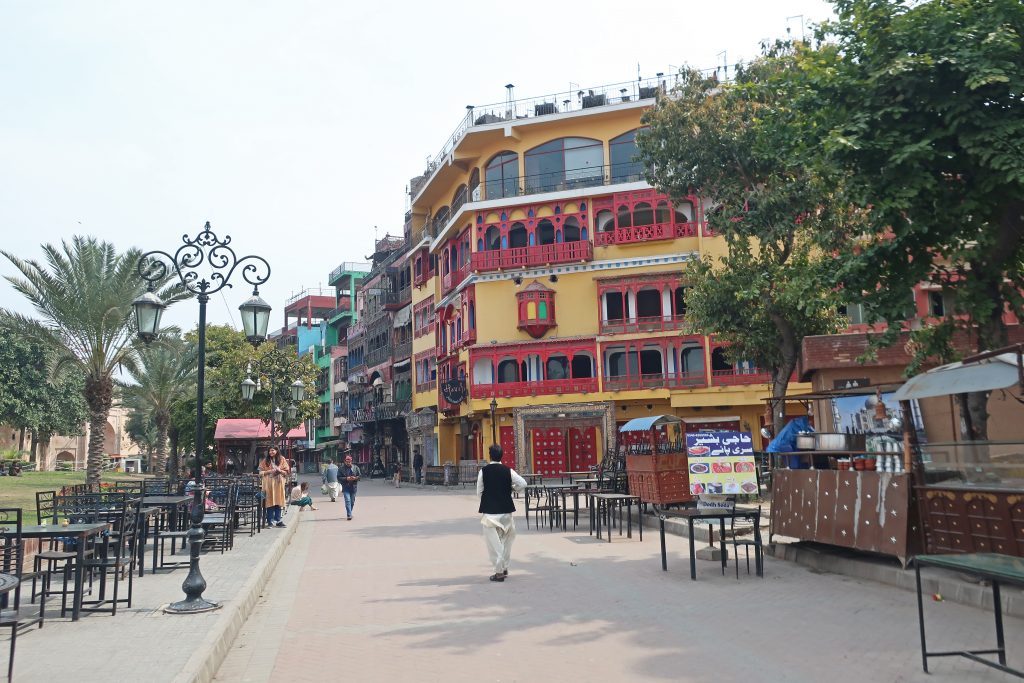 You can find great views of the Badshahi Mosque from Food Street. 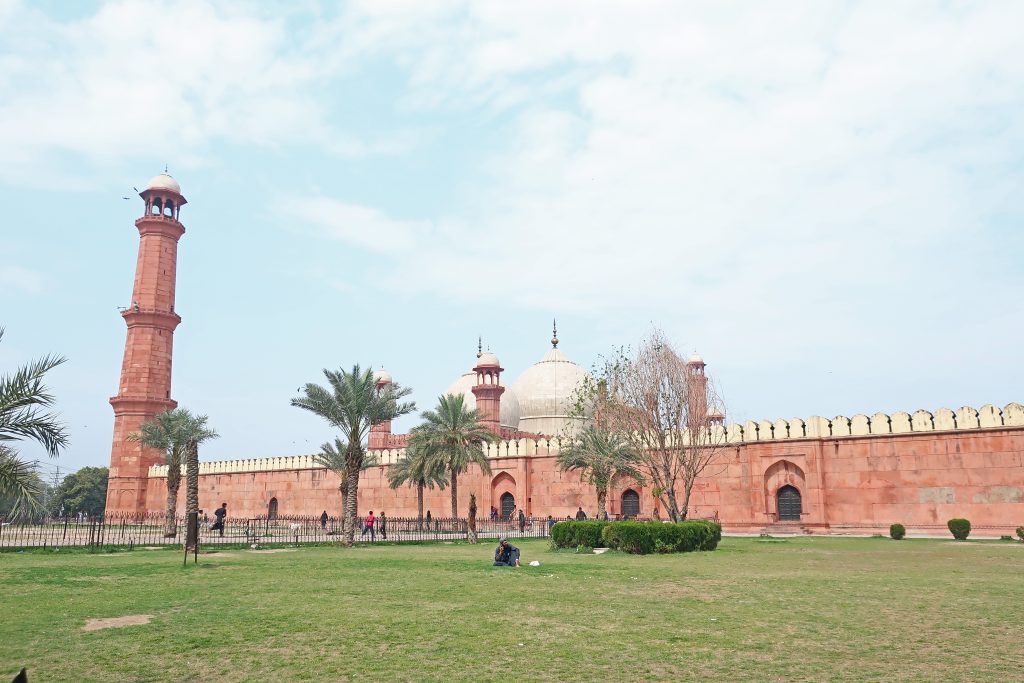 The Shalimar Gardens are one of the top tourist places in Lahore.  This is the second UNESCO World Heritage Site in Lahore. The gardens are another Mughal relic. They were built in the style of Persian paradise gardens during the mid 17th Century. Paradise, meaning that the gardens created a spiritual connection between humans and nature. 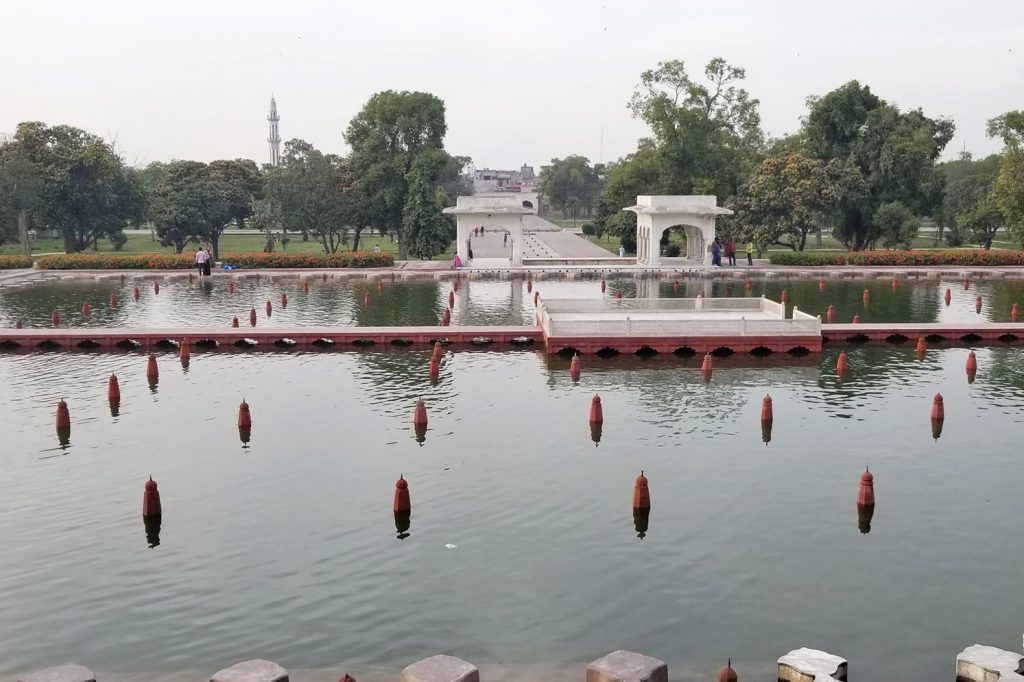 This post may contain compensated links. Please read our disclaimer for more info.

Thank your so much Valentine for coming to Pakistan. Badshahi Mosque is not only a religious place as a mosque, but a history too… Carved work on walls and roof…ceiling and courtyard tell a story of that time…bricks that used here are finest work you can observe anywhere… The grandeur and dignified ambiance will capture you And somehow takes you that era when a sovereign bow down before a magnificent sovereign…

The ancient heritage sites of Lahore like the Badshahi Masjid, Shahi Fort, and Sikh Gurwara are not only masters of architecture…but also a memoir to the people who lived here for centuries. We can not find such beautiful carved paintings & buildings in present history.
Much respect for those who erected them for us.

This is very useful information.
thanks for sharing

Worth reading article from now on this is one of my favorite blog. I have save your site and definitely I will visit here again.

Great article keep it up.

Valentina’s Destinations was born from my obsession with meticulously researching, organizing and planning travel itineraries. I make destination maps that include everything you’ll ever need. I do all the planning, so you don’t have to!