This Valencia Tourist Map includes all of the top attractions and recommended restaurants. We’ve added the best places to eat paella, sip horchata and drink bold coffee. Some of the top things to see in Valencia are the Silk Exchange, the Valencia Cathedral and the Serrans Gate. In the map, attractions are in blue. Green knife and fork icons mark restaurants. Pink ice cream icons show you dessert places. Purple drinks indicate bars and rooftops.

FIRST: Learn how to use this map.

El Carmen is a great neighborhood for Valencia sightseeing. It’s located in Valencia’s Old City district. One of the most popular attractions in El Carmen is the Serrans Gate. The Serrans Gate, the Quart Towers and the Gate of Valldigna (also located in El Carmen) are remnants of an ancient city wall. The wall was built in the late 14th and early 15th Century to protect the city of Valencia from attack. 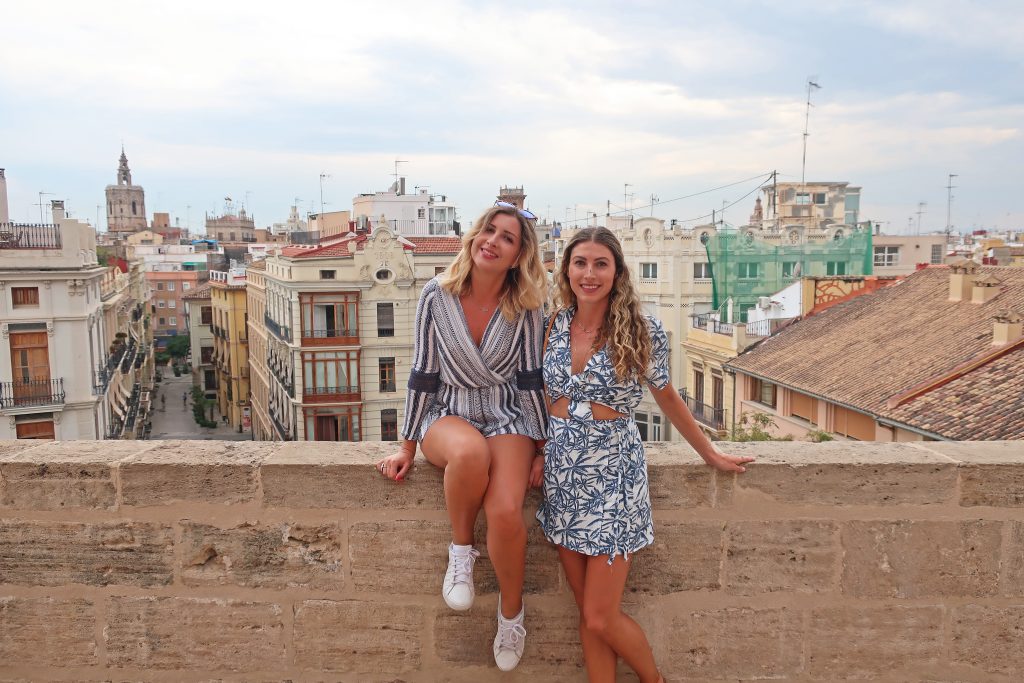 The Serrans Gate is one of the best preserved monuments in Valencia. Also, it’s one of the largest Gothic style gateways in Europe. It is one of the many examples you’ll find of the Valencian Gothic style. You can visit the Serrans Gate any day except Monday. It is open mornings and evenings with a few hour intermission in the afternoon. It only costs 2 euros to enter, and you can take beautiful photos just before sunset.

A few minutes away from the Serrans Gate is another one of the popular Valencia tourist attractions —the Portal of Valldigna. This archway of the ancient city wall lead into the old Arab quarter. It is named for a Monastery that stood at the base of this entryway. Just above the arch, you’ll see a reproduction of an altarpiece from this monastery. The Monastery was dedicated to Santa Maria of Valldigna.

The Portal of Valldigna 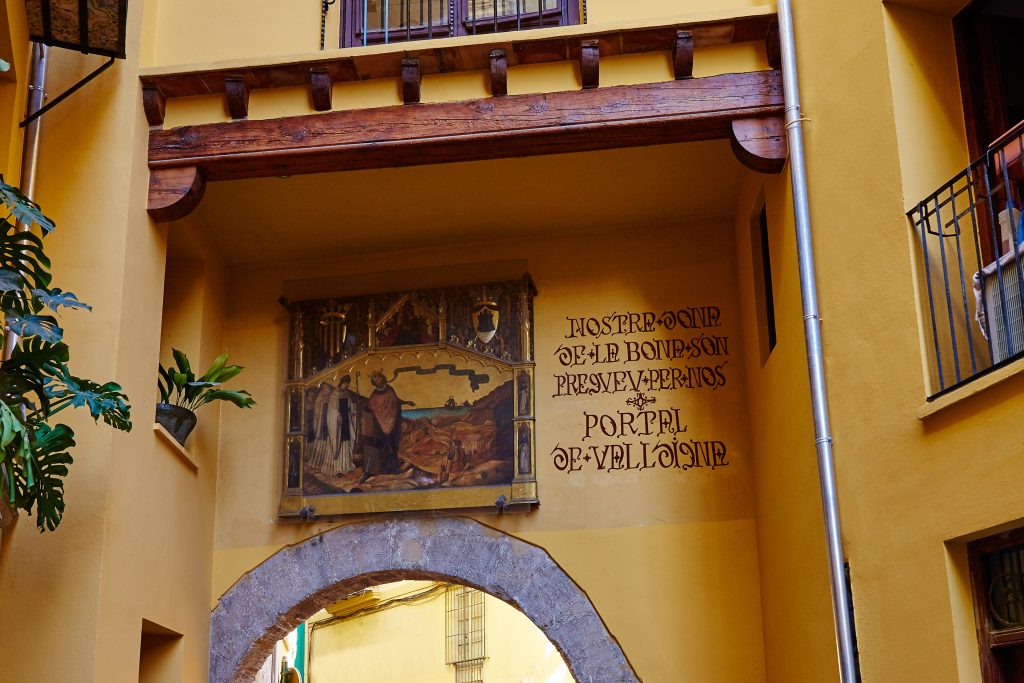 Another great find in El Camen is the Toy Soldiers Museum. It’s a must-see for those who like miniatures! This museum contains one of the world’s largest collections of toy solders, with over 90,000 figurines! This museum has limited hours especially outside of summer months, so be sure to check a inhead. Admission is 8 euros.

Nearby, is the Church of San Nicolas. The outside facade of this church is a unique collection of Gothic and Baroque features. Inside, you’ll marvel at the ornate frescoes and carvings. The Church of San Nicolas is known as the “Sistine Chapel of Valencia.” You can visit any day except Sunday. Admission is 5 euros and includes an audio guide.

The Botanical Gardens of Valencia are technically in the El Botanic neighborhood, but hey’re just a minute down the street from the Quart Towers. At Valencia’s Botanical Gardens you can find over 3,000 unique species of plants.

The most unique feature of the El Carmen neighborhood is the House of Cats. It’s the tiny facade of a Valencian style house built into a wall —it was built by an artist (and cat lover). It’s somewhat underwhelming, but cute…As a cat lover myself, I couldn’t leave this out!

Some of the top Valencia attractions can be found in the La Seu neighborhood. Here you’ll see the Plaza of the Virgin, the Valencia Cathedral, the Basilica of the Virgen and the Tower of Micalet.

Plaza of the Virgin 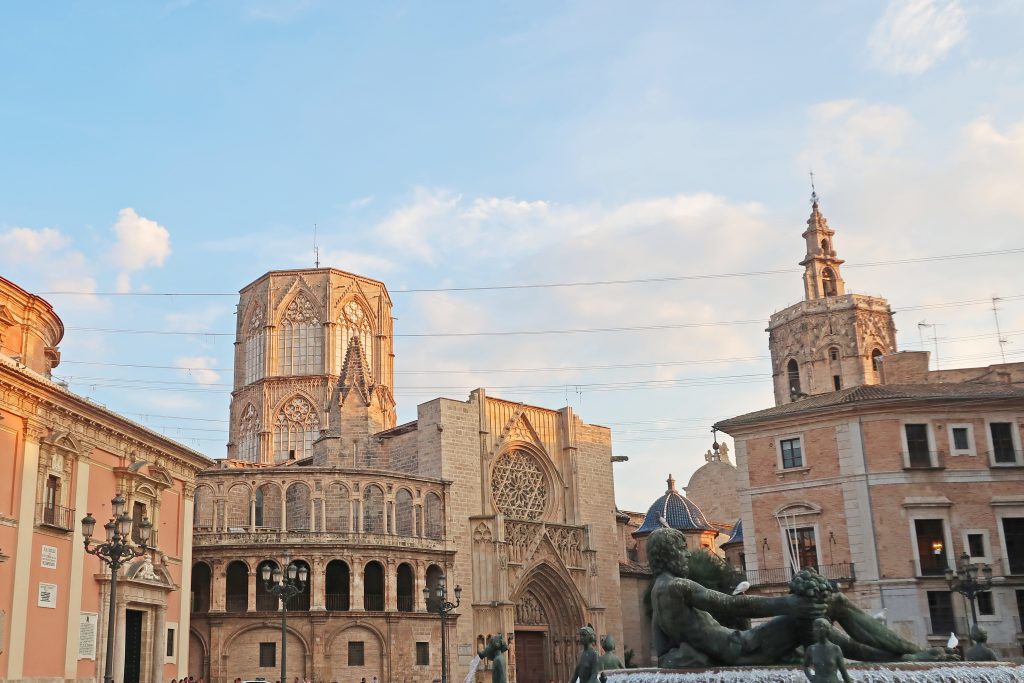 From the Plaza of the Virgin, you’ll get great views of the Valencia Cathedral, the Basilica of the Virgin and the Turia Fountain. This plaza used to be the main town square for Valencia. Even before that, the Romans used this as a commons. It was at that time the”Plaza de Ayuntamento.” Now, it’s a bustling public space excellent for people watching. You’ll find a lot of great restaurants nearby.

This plaza is also the meeting point for the Valencia Essential free tour that meets every day at 10:30 and 12:00 PM. Make sure to reserve your spot in advance! 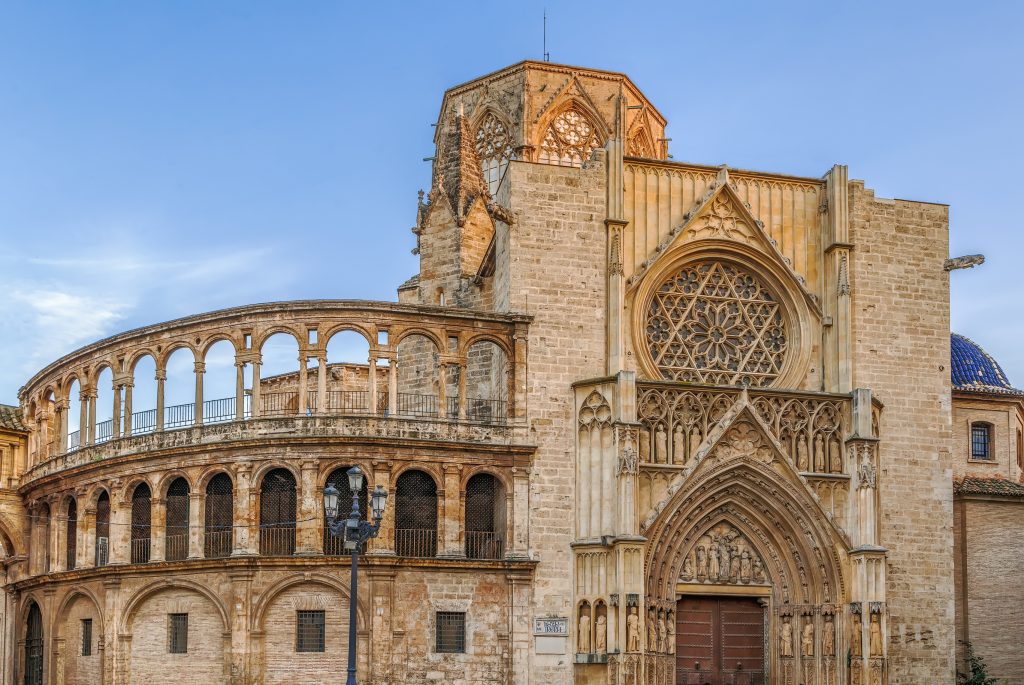 The Valencia Cathedral and the Basilica of the Virgin are the most important churches in Valencia. They’re also two of the best places to visit in Valencia. The Valencia Cathedral is a hodge podge of different architectura styles. From Romanesque to Gothic, Renaissance and Baroque, it’s collected many interesting features during the many renovations since 1238. It is also famous for holding, what is suspected to be, the true holy grail! Check out the elaborate alters and the beautiful frescoes. You can visit the Valencia Cathedral and Museum every day except Sundays. Your 7 euro admission ticket will include an audio guide.

Also, make sure to climb the cathedral’s Bell Tower —the Tower of Micalet. For only 2 euros more, you’ll get to see sweeping rooftop views over Valencia. 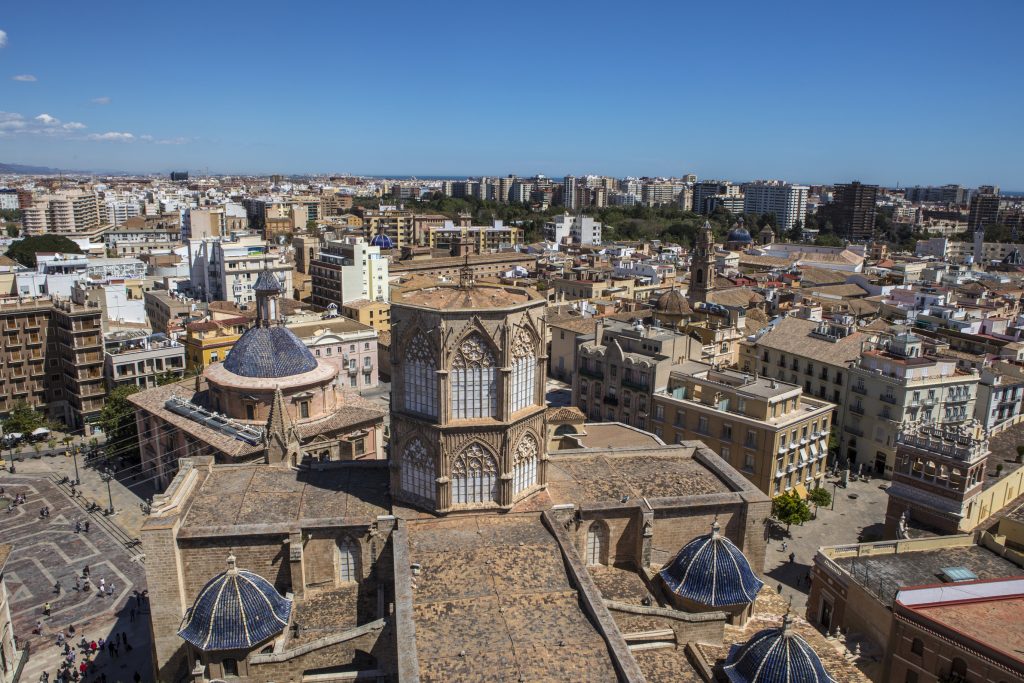 Next to the beautiful Valencia Cathedral is an important Basilica. The Basilica of the Virgin of the Forsaken is dedicated to Valencia’s patron saint. It was one of the first Baroque constructions in Valencia and an important church at this time. Inside, you’ll find a statue of the Virgin Mary and priceless frescoes. This church is open most every day, and it is free to enter!

Basilica of the Virgin of the Forsaken 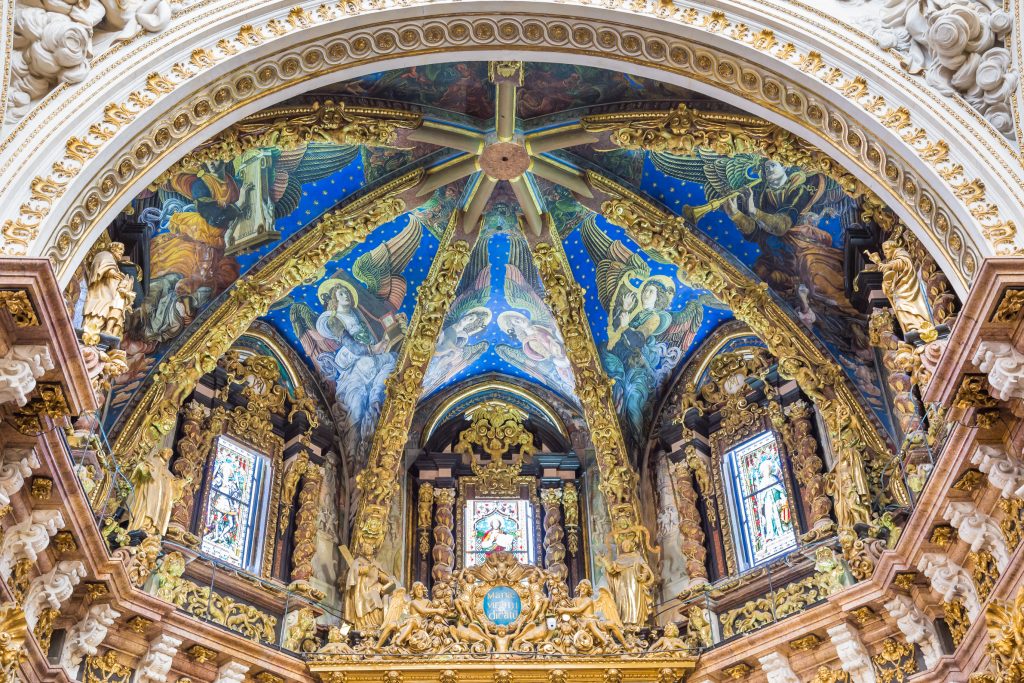 The final treasure in La Seu is the Almoina Archaeological Museum. In this museum, you’ll find treasures from the Roman, Visigoth and Arab periods in Valencia. The museum is itself built on top of city ruins. This museum is free to visit on Sundays and only 2 euros every other day!

El Mercat is another popular neighborhood in Valencia’s Old City district. It’s Silk Exchange is one of the best things to see in Valencia. Also, the Central Market is another one of the popular Valencia sights.

The Valencia Silk Exchange is a UNESCO World Heritage site. It’s considered one of the most beautiful examples of 15th Century Gothic civic architecture. The interior is especially amazing. You’ll see twisted columns, elaborate ceilings and original furniture. It looks and feels like a castle, but it was actually used as a trade headquarters. 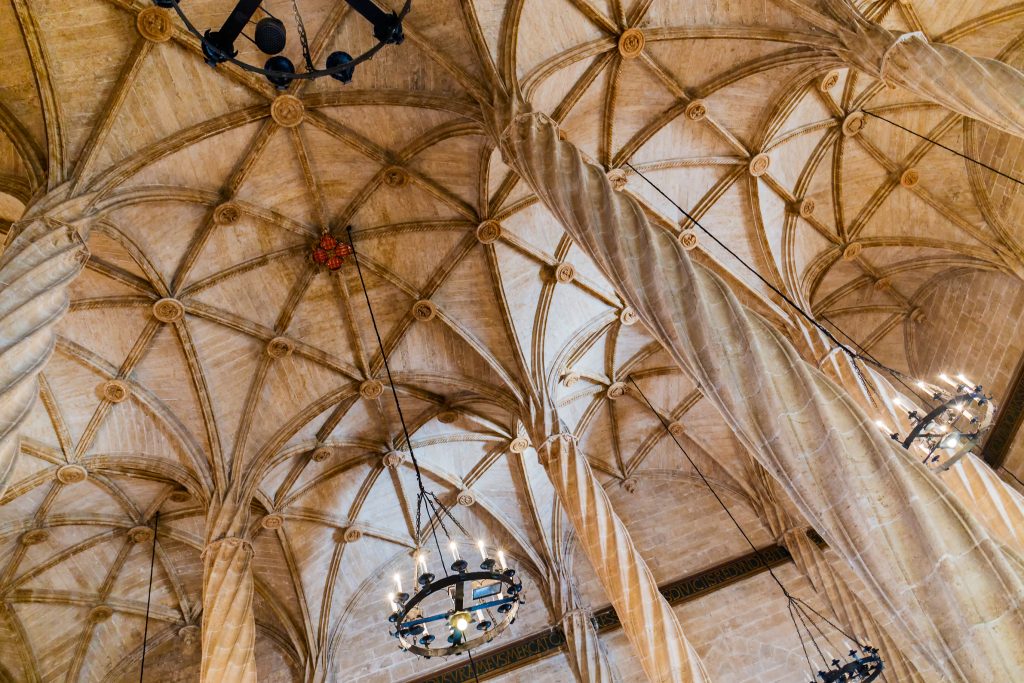 You can visit the Valencia Silk Exchange any day except Mondays. It is free to visit on the weekends, and 2 euros during the week. If you visit on a Sunday, you’ll also be able to see the coin collections.

Just a block away from the Silk Exchange is the famous Central Market. This is a great place to pick up local produce, fresh meats cheeses, and authentic tapas. We also bought wines and Turrón to bring home. Stock up on food here, so you can save money at restaurants later. 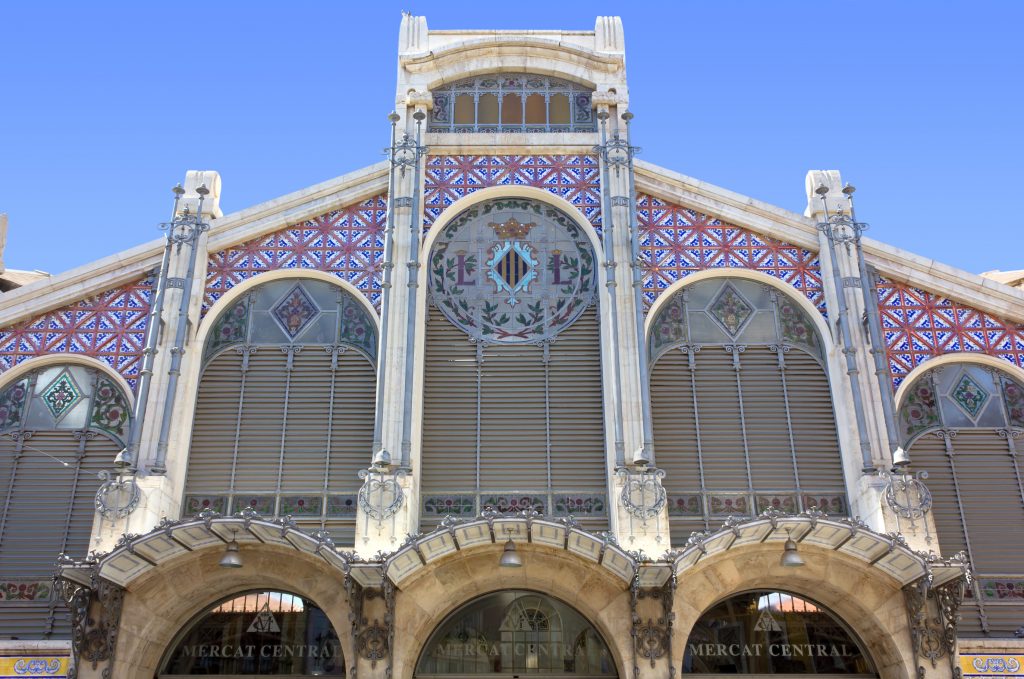 The Palace of the Marques de Dos Aguas is in the La Xerea neighborhood. It’s one of the top sights in Valencia because of it’s historical significance and lavish design. It was the mansion of an important noble family. Today, it is a museum that holds one of Spain’s largest ceramics collections and a Picasso painting. Pay attention to the extravagant doorway decorations when you enter. Notice the original furnishings that have been artfully restored. 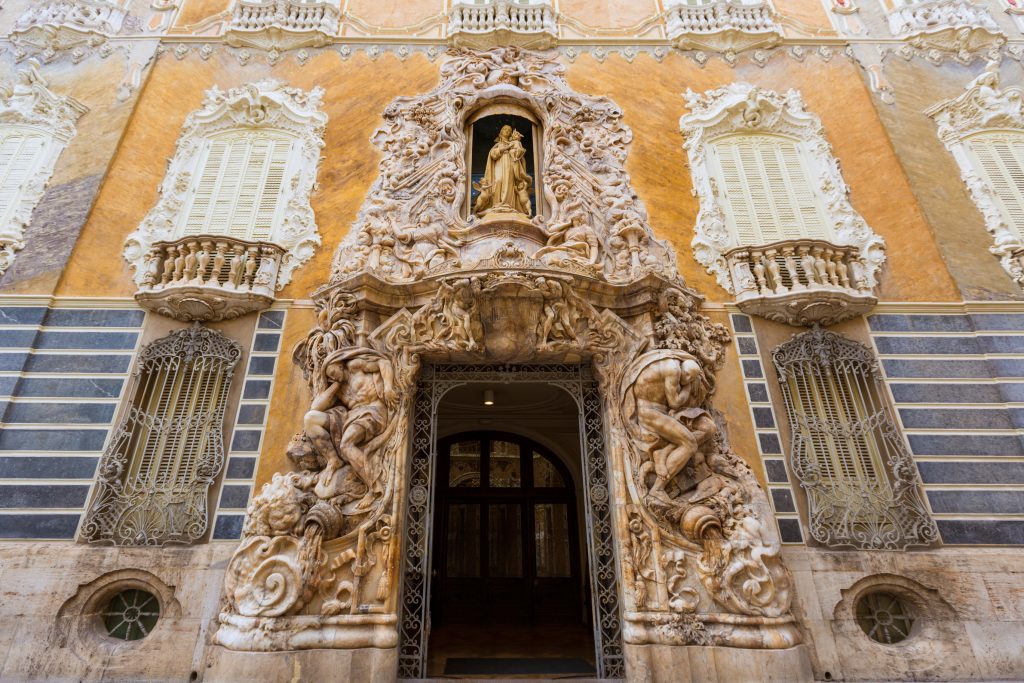 This is another place that’s closed on Mondays. It’s also free to visit Saturday evenings and Sundays, but has only a 3 euros admission fee at other times. 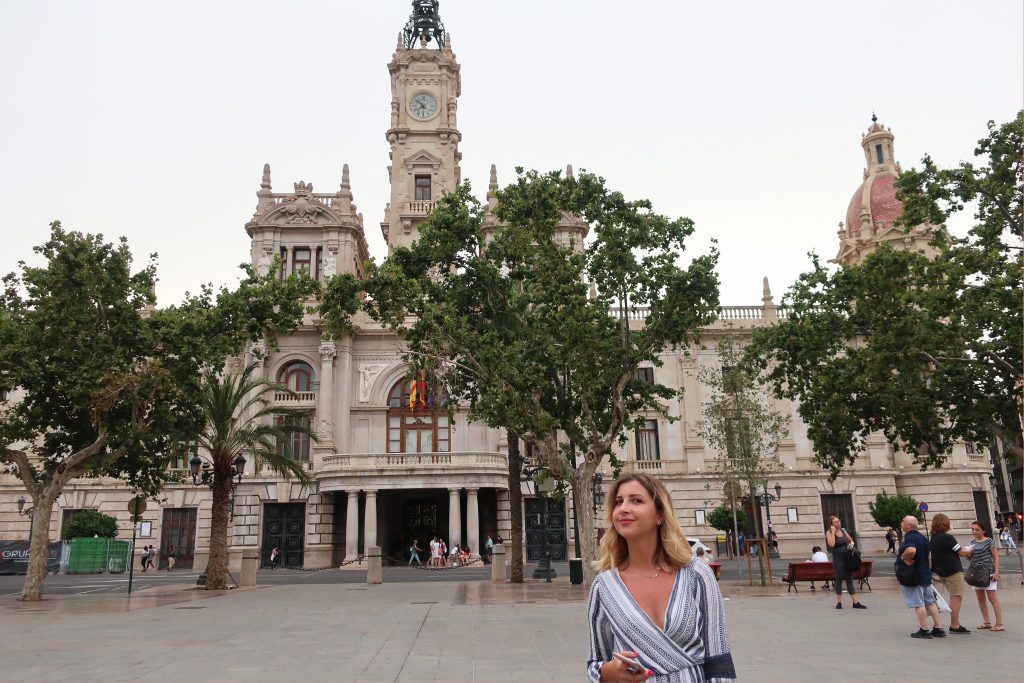 The town hall square, or Plaza del Ayuntamiento, is a must-see. It is beautifully landscaped and has a large, lavish, fountain. This places comes to life at night, it’s bustling with activity. Come here in search of food & shopping, and you won’t be disappointing! 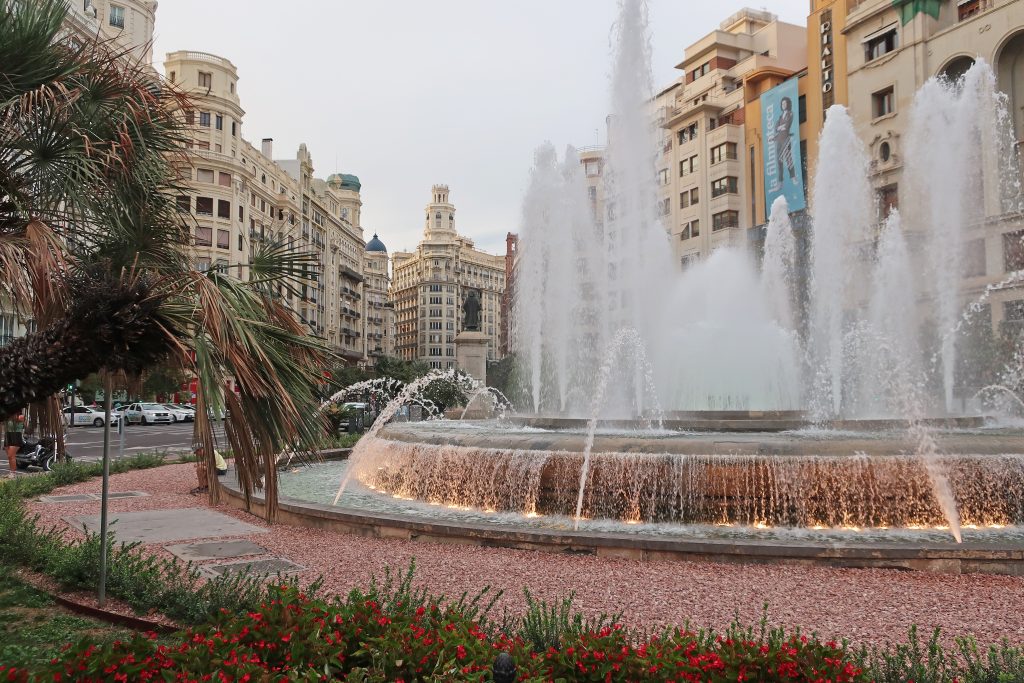 Nearby are also the Bullring and North Station. The Bullring was built in the mid 19th Century in the Neoclassical style. It’s design was inspired by the Roman Colosseum and Arena of Nimes. It was built as an entertainment venue for bullfights.

North Station is Valencia’s main station. It’s an unbelievably beautiful work of Spanish art. Certainly, it’s one of the top places of interest in Valencia.

Trinitat is one of the less touristy Valencia neighborhoods and a hidden gem. It’s home to the Royal Gardens and the romantic Royal Bridge.

The Royal Gardens were once grounds of the Royal Palace. From here, easily connect to the Gardens of Monforte. Take the Royal Bridge across the Gardens of the Turia River. Finally, make sure not to miss the Bridge of Flowers. 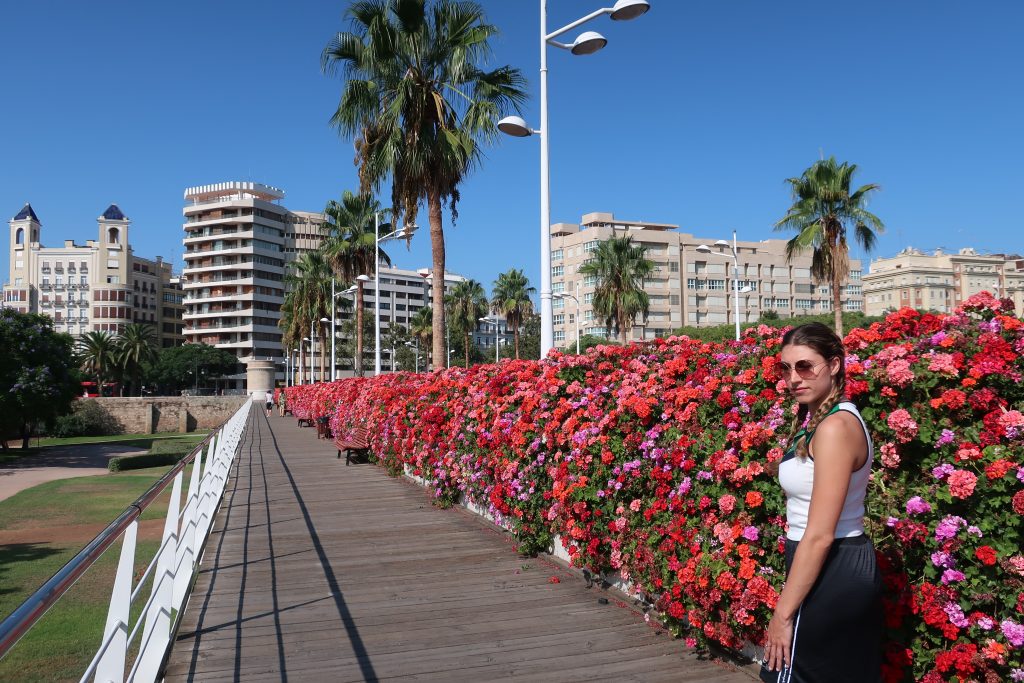 The City of Arts and Sciences is located in Valencia’s Four Routes district. It’s museums are the top places to visit in Valencia. The oceanographic museum here is the largest in all of Europe!

City of Arts and Sciences 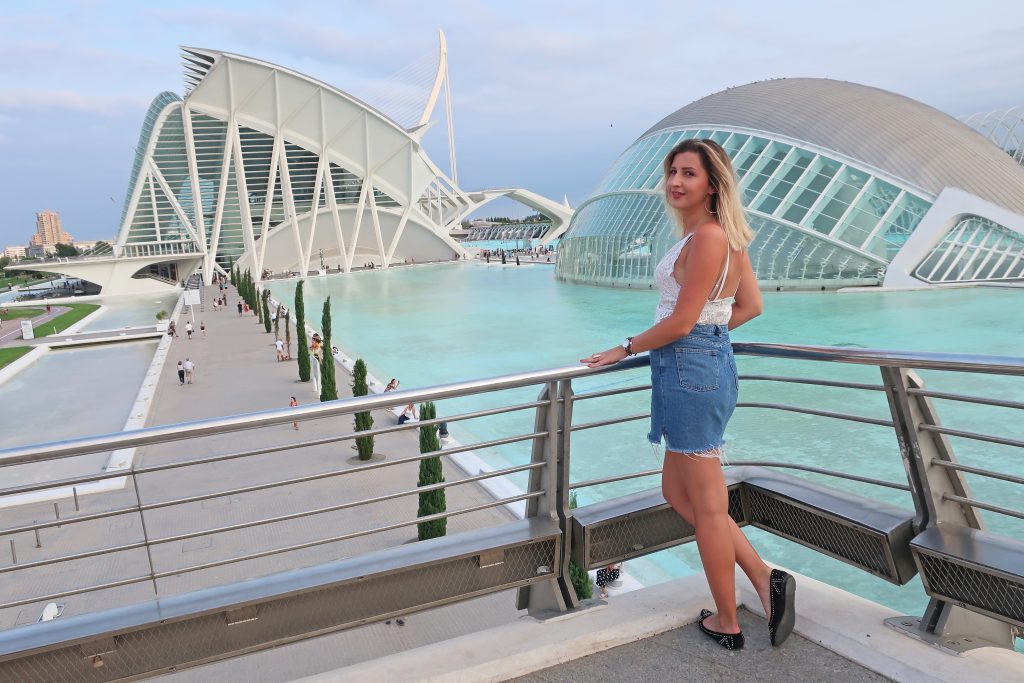 There’s also a fun and interactive science museum. I recommend this to anyone who says they don’t like museums! It’s fun. You’ll get to taste the salinity of the Mediterranean sea, play games and manipulate models…all in the spirit of learning. The whole museum campus is wonderful to walk through, it’s futuristic and fantastical. It feels like you’re in a different world!

The top things to do in Valencia are on the beach! You can get to Valencia’s nearby beaches with a taxi, walking or public transit. You can get to Patacona Beach and Cabanyal Beach in a hour and 30 minutes walking from Valencia’s City Center. It will take about 45 minutes by bus, and it will only cost a few euros. However, I recommend getting a cab.

All of these beaches had nearby restaurants, shopping and changing rooms. We were able to rent lounge chairs for the day for 6 euros per person. 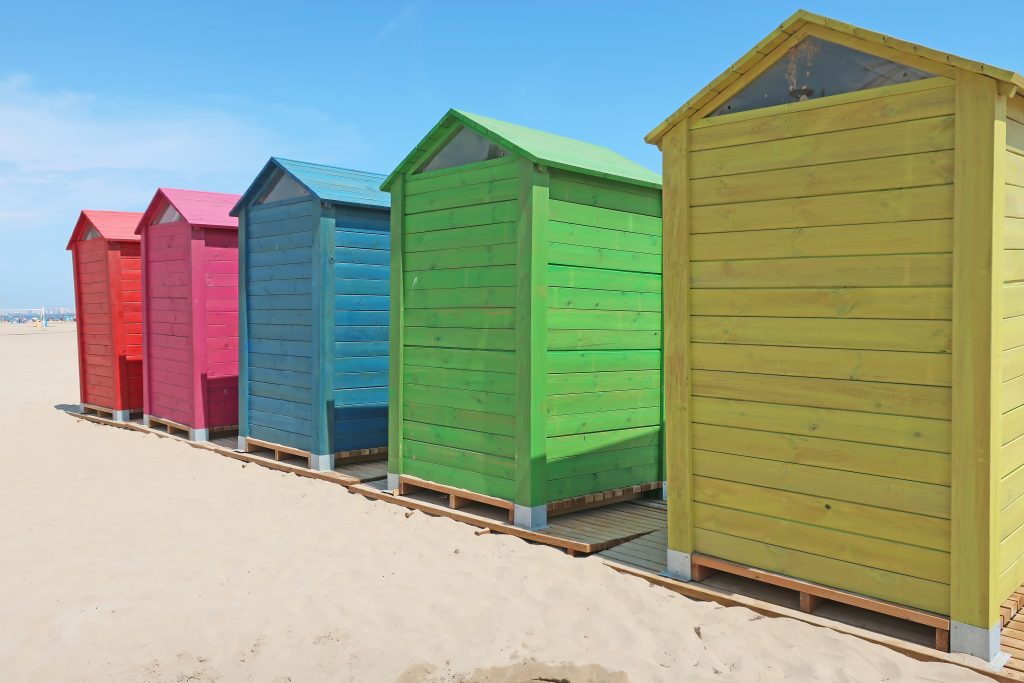 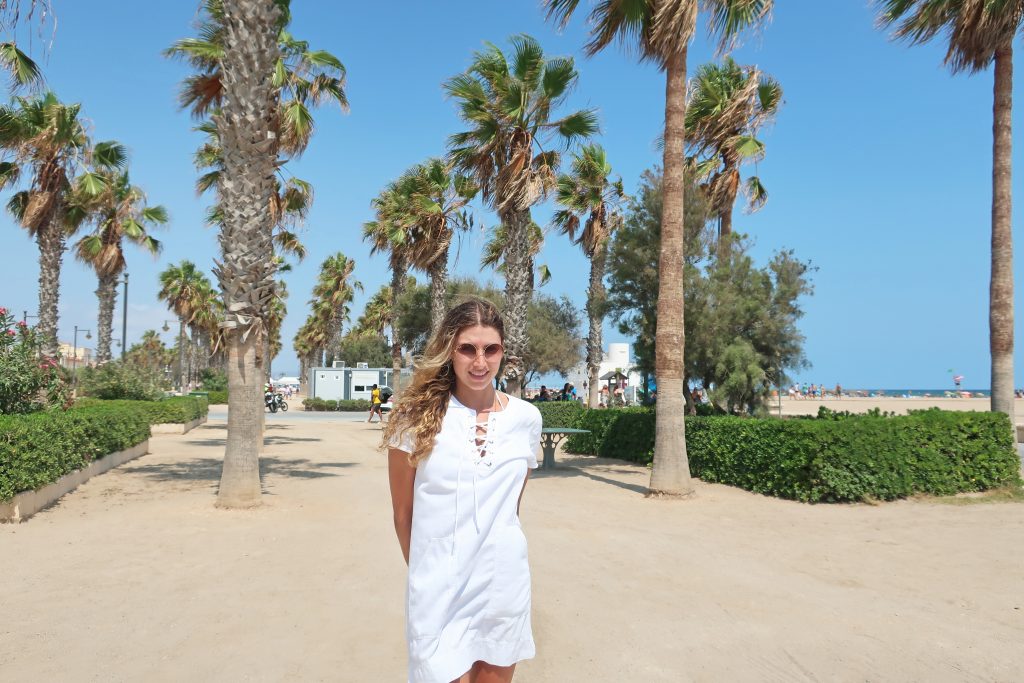 Port Saplaya is farthest away, so you’ll certainly want to take a cab or bus. It’s got colorful shops and apartment buildings lining the beach. We climbed on this rocky ledge to take photos. There’s also a cute tiki bar here. 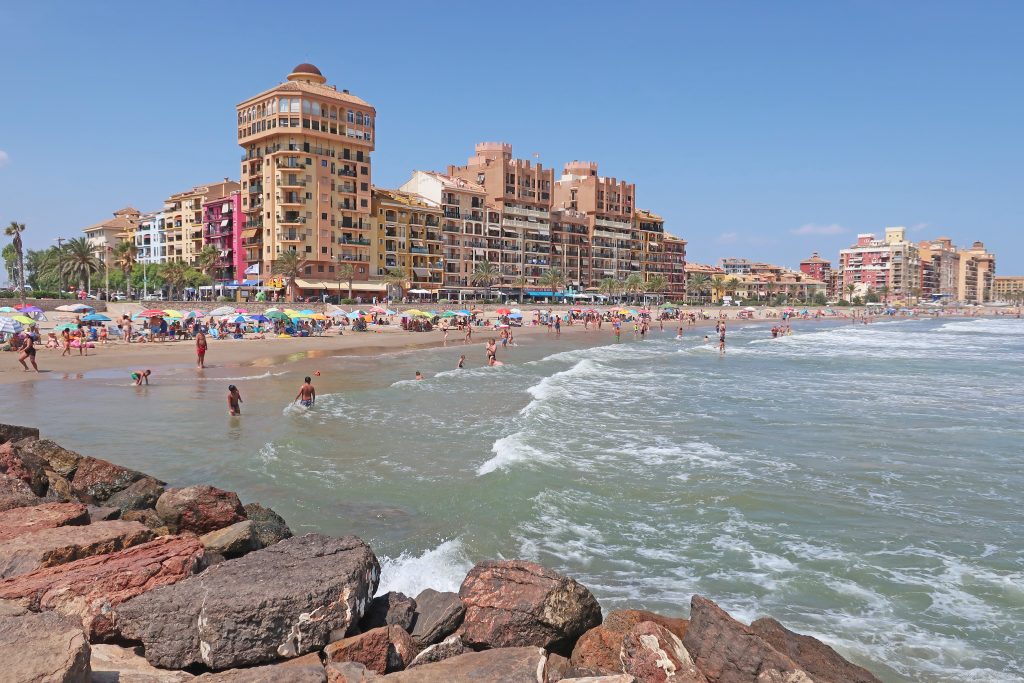 This post may contain compensated links. Please read our disclaimer for more info.

Best Places to Stay in Madrid by Budget

Valentina’s Destinations was born from my obsession with meticulously researching, organizing and planning travel itineraries. I make destination maps that include everything you’ll ever need. I do all the planning, so you don’t have to!